Show some gumption, my dad used to say. Just go do it. Just keep at it, he told me, though he wasn't always so good at that last part himself. 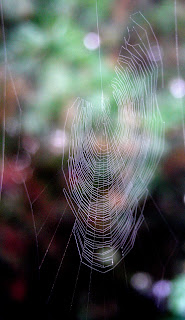 I have been feeling a distinct lack of gumption lately. Just getting out of bed in the morning takes a lot of effort, though it's easier to drive myself once I manage to remember all the stuff I need to get done during the day to take care of the boys, fulfill obligations and keep things running. I suppose it's a sign of depression, though I don't think it's really serious. I just lack the gumption to get on with things. 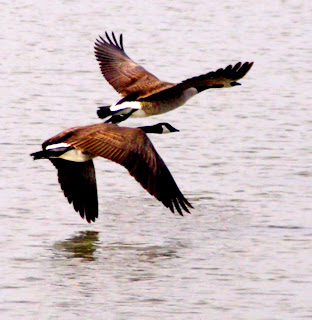 So Paul got laid off the Monday before this past Monday, along with everyone else at the company he was working for. And they are actively trying to get new funding (they're a start-up with some successes, but a still a start-up working off of investment capital). It's also the computer games business, which to be honest, I have very little faith in after all these years of working off and on in such a volatile industry. We're in hard times now, and games are a luxury item for most people. So everyone was laid off after working most of a month without pay. And the layoffs were back-dated about a month "so that everyone could apply for unemployment that much sooner". Though to be honest I wonder about that back-dating part- how convenient if they don't manage to get the funding; surely they wouldn't be required by law to pay the back wages owed since everyone's layoff was back dated to the period when they were still being paid and the non-paid period conveniently falls into the after-layoff period according to the books? I am a cynical woman. Paul remains determinedly, cheerily optimistic and believes in the good intentions of everyone involved, while I have mentally already written them off as bad juju and concluded that those wages owed will never be paid. Cynical. Jaded. Kind of depressed about the whole thing. 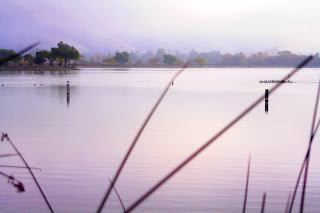 Anyway. My various small money-making ventures are not near enough to pay our way, so both of us will be searching for work that can hopefully feed our little family and pay the mortgage and the electricity and all the other bills. And hopefully still pay for Casey's gymnastics, though that's pricey. We managed to keep his gymnastics going the last time when Paul was laid off, and that lasted almost a year. We had just managed to pull ourselves out of debt from the last time. 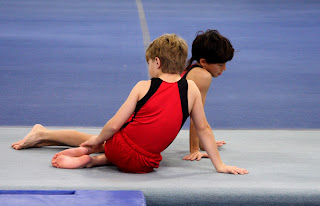 It's odd, the reactions I get to the whole gymnastics idea. It's a luxury thing, people say. He should quit for the good of the family finances. He should quit for a while at least. He should suck it up and sacrifice for the good of the family. Some people have just been opposed to it from the beginning, warning me about Casey working too hard and getting his body distorted by the intense workouts and so forth, as well as the amazing, immense, wasted expense of paying for a sport that most people have to quit when they are still young. They see no value in the whole endeavor at all. And I've never had good answers for those kinds of statements. They've already made up their minds and trying to convince them otherwise seems like wasted effort, really. We fell into it all by chance, without realizing how important it would become to Casey, and his abilities and enthusiasm took us all by surprise. So I usually just tell the critics that Casey loves doing it and he's really, really good at it and we'd like to give him the chance to take it as far as he wants to and we can afford. That's usually a good enough answer. 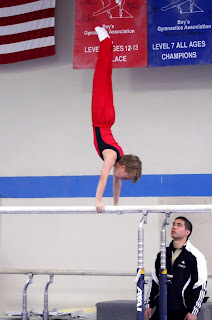 The real truth is that he's seriously committed to it, but he is usually really committed to whatever he decides he wants to be good at. He could have taken on a lot of other sports and been exceptional. He has a drive to excel and doesn't handle failure well, though I guess he'll eventually have to learn to face it just like the rest of us. With gymnastics, the bald financial fact is that we will never have the kind of money required for him to take it as far as he can; gymnastics is a sport for wealthier people. He's going to end up being limited by our inability to pay for wider-ranging meets, better coaches and all of that. There will be no Olympics for Casey even if he is good enough. Maybe it's made easier by the fact that he probably won't be good enough, honestly; we're not willing to distort his childhood to the extent that would be required for him to get that good and go that far even if we could afford it. But as he progresses further and keeps improving with no plateau in sight, it's harder to see any clear delineating line of 'enough is enough'. Money will end up being the limiting factor. 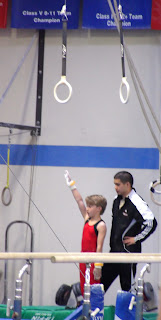 We were watching an episode of Star Trek: Next Generation the other night and poor nerdy Barkley was having to face his fears of the transporter and do something that was really scary for him. And Casey just quietly said "I have to do that all the time with gymnastics; I have to learn to do lots of things that are really scary." And of course he's right; a lot of those moves are scary just to watch, let alone perform. He's had to face and overcome his own fears so many times he feels like he can try most anything, I think. Oddly enough it makes him kinder to other people when they admit they're afraid of something, and he can reach out and be gently encouraging. (Unless it's his brother and then he just gets impatient; if he can do it, his twin should be equally able, at least to his thinking.) 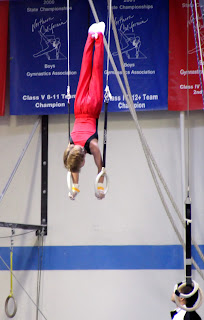 Casey had his first meet of the season last Sunday. It was a special meet put on by the judges and they made special efforts to talk to the boys individually and give them feedback on their routines so they could still improve before the start of the formally judged meets. And Casey did exceptionally well. 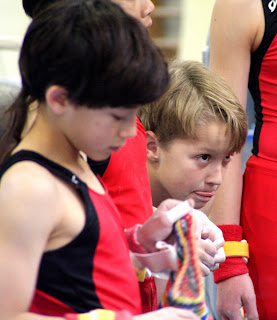 Casey got intense, excruciatingly painful stomach/intestinal cramps halfway through the meet, but he kept trying, kept going right up to the last routine, high bar, which he scratched out of at the end because holding some of those positions was just too painful. But he persevered through most of it, determined to do a good job. And he did. He showed real gumption. 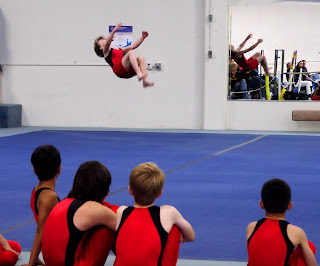 The thing that I keep coming back to with Casey and his gymnastics is the sheer amount of work and consistent commitment required to get good at it, in addition to any physical gifts one might bring to it. It takes a lot of determined work day after day, and Casey doesn't falter or complain about it. I wish I could feel that way about most any aspect of my life right now. It's been a long time since I've felt that level of commitment to much of anything except trying to do right by the boys. And that is a hazy thing to figure out at best, that 'do right by' part.

So here I am, looking at our scary financial situation and wondering at my own lack of gumption. All I want to do is hide, honestly, though that's not an option. I wish I could see a clear path that was the obvious right choice and the best thing to do here. I have faced some of the big stuff: death of loved ones, surgeries, cancer. Most of them you simply don't have a choice but to go forward and through, though you're scared shitless.The obvious answer in this current situation is: "go out and get yourself a god-damned job". Though that's made tougher by having been out of the regular work force for the last 10 years, and the mass outsourcing of artists overseas, and my lack of training in current technology, and my various health issues and kids' needs and so forth. I want to be able to work at home so I can be with the boys and be a decent parent to them. I'm an artist and artists are not valued in this society, nor are moms and especially older women. It all combines to make me feel worthless, unwanted, a waste of resources. Of course it sounds silly and melodramatic to say things like that out loud, doesn't it? Excuses, perhaps, all of them, but everything combines to paralyze me in this amorphous fog. 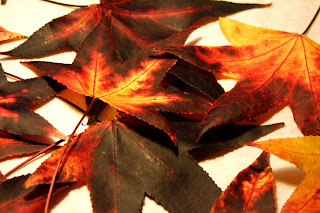 I know we'll get through this; we've gone through worse. I just wish I could dump this resigned, defeated feeling of "Really? Again? So soon?"

Gonna get up the gumption to go get the dishes washed. It's a start, at least.

Somebody yell out my name, would you, just so I can work my way through the fog towards the sound of your voice?