Getting Ready
Have I mentioned lately how good it is to have friends who will help you out? I was trying to select and organize The Portfolio for the Illustrator's Showcase at SCBWI that's coming up very shortly, and whinging about how I was going to manage to pick and select and all that, and several of my buddies offered to help me. Really? Someone else would willingly go through the hell of putting together a portfolio for someone else? Well, gee, yes, thanks, that'd be so helpful, I mumbled. Or something, I'm not too sure that I was at all coherent in retrospect. So last Sunday we got together, had a lovely lunch that couldn't be beat and then laid out all the prints and started going through them and selecting and organizing and trying them in combinations in the book and all that. And we all survived and it looks great. Several combinations are really cool ones that I would never have thought of putting together but I love them. So my thanks go out to Michealle, Linda, Karen and Callista. 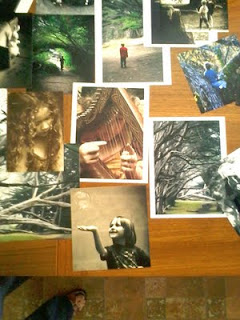 I'm in the midst of mad packing since we're leaving tomorrow for the trip down south. Clothes for everyone, sunscreen, all that stuff. Even got the car cleaned out and washed (good god, what will that do to the space/time continuum?!) and I still need to do a huge list of other stuff to get ready to be gone. Stressed out? A bit, yeah...

The boys and I still took some time out to go to the beach with some of my other pals. We cleaned up the beach and played and had another lunch that couldn't be beat and talked and drank a bit of wine and got plenty sunburned.
So, must run and take Riley off to his guitar lesson before dealing with all the other things I'm procrastinating about. Later!

I've been working on the new portfolio to take to the SCBWI Summer Conference. Only a couple of weeks now. We're going to combine the Conference trip with visiting the Kwinn Clan down in LA, so time is getting tight as far as prepping for the conference. The boys are still home from school, though, so that complicates getting things done a bit. 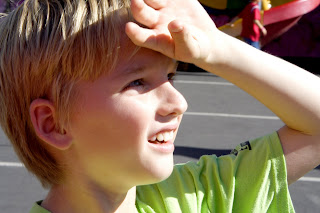 Though to be honest not getting work done with them around is a lot more fun than staying home.
Anyway, I posted about my portfolio angst over in Sketcharound, so this year I'm trying to pull together a photographic portfolio rather than an illustration based one. It feels weird, to be honest. I have a lot of different portfolios that have been pulled together over the years, for different kinds of illustration work mostly. At least when I do an illustration portfolio I feel like I know basically what I'm doing. And I've pulled together photo based portfolios before, but they were for very specific markets (like getting kids' portrait work). This one is a bit looser, because I want to create a mood more than anything, hint at storytelling with the images. Telling a story is harder with photographs than illustrations for me, I think, since my photographs are basically capturing real moments rather than staged things, whereas with an illustration you can try to shoehorn a bunch of relevant storytelling elements into a picture and then move them around to still have a good composition etc. Since you're making it up you can include what you need. Photos like mine, not so much, so it becomes more dependent on implying things. Anyway, I've been combing through the files for likely images. 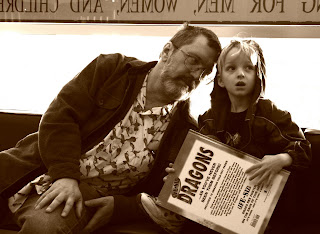 And it's fun to rediscover stuff I took a while ago and had put aside or forgotten or just not used for one reason or another. Some images have surprising longevity, though: 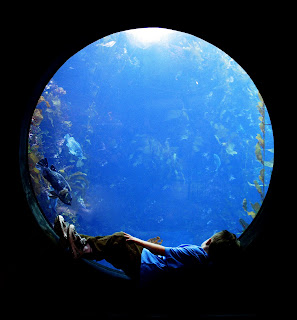 This one has been used a lot by the Monterey Bay Aquarium for their various promotional materials; they just sent me a very pretty new photo book about the Aquarium that includes this image above, which is really nice. :)
Anyway, off to pick up Casey from gymnastics and then to the Post Office to mail off some Etsy goodies. A lovely lady bought one of my paintings!
Posted by Beckett Gladney at 2:53 PM 2 comments:

Paul's Birthday is the Fourth of July. 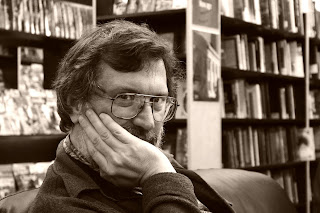 It's odd to realize that I've spent well over half of my life living with this guy. We met way back in 1980, in college at UC Davis. He was funny, he was witty and he made me laugh. He still does, fortunately, even when I want to whack him upside the head for annoying me about one thing or another. 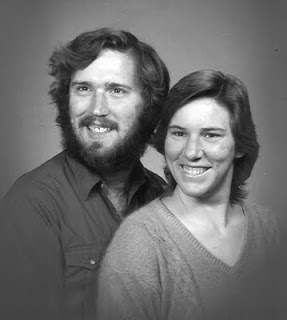 I used this picture as reference for our wedding invite (a painting I did, which I have no pics of now, unfortunately). Riley says I look completely different now, but Dad still looks like Dad. I'm not sure I want to examine that comment too closely. He's always been pretty hairy, though maybe not so much when he was a baby:
Heh. Moms always have the best blackmail material. ;) So when I got together with him, he came with a whole big family who took me in as one of their own. Lucky for me, they're really cool people and I'm very fortunate to have them as part of my family for all these years.
Where was I? He's really a homebody; he doesn't much care about travel just for the sake of travel; his idea of a vacation is to travel to where friends and family are and hang out with them. He could care less about all the other stuff; he wants to play games and gossip and play music with all of his buddies.
He's made a lot of good friends all over the place, so it seems to mostly work out. Paul got more and more into playing music and keeps making more friends that way, and I did too. We've ended up going to music get-togethers, music conventions and whatnot over a lot of years and playing with the most amazing people. They've become dear friends, family really, that mostly live far away so we don't get to see them nearly often enough.
And trips to Toronto or Winnipeg or Seattle or Germany or the East Coast or the Midwest aren't so easy these days. Not that they ever were, but you know, between having kids and the economy and all, it doesn't happen so much now. Thank goodness for the internet for staying connected.
My own perspective on this guy is probably skewed by the fact that I've lived with him for all these years; he drives me crazy with some of his habits, like being messy, not putting anything away but piling things on every flat surface in precarious mile-high stacks of boxes and documents, magazines and mail, carrying around his stuff in crinkly plastic bags (what's up with that?). We have both been irresponsible with money in the past, and that has caused problems at times. Growing up financially took longer than it should have, perhaps, but it's getting better. 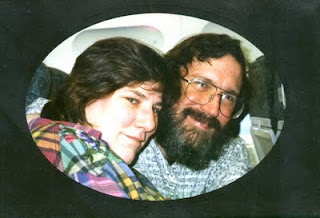 He always knows the rules to any game better than anyone else present. He used to sit for extended periods reading rule books for various games, so he became the resident rules encyclopedia amongst all of our friends. Not so much time for that anymore, though he has made his living making games of various sorts in all the years since college. And the Rules Master is carrying on his habits now with our next generation as well.
Yeah, see, we did eventually manage to get around to having kids. Twins, even. Boys. Paul told me before they were born that he really hoped that someday they would want to play games with him. I think that one's come true pretty clearly; Riley has gifted his dad this time around with a Magic Deck of Riley's own devising. I've been listening to hours of secret discussion on this wonder deck and how to balance the kinds of cards in it to so it will become invincible. I just listen and nod a lot because frankly most of it is over my head. It's a bit scary to watch how much of the strategy and rules of all of the various games the boys have picked up. 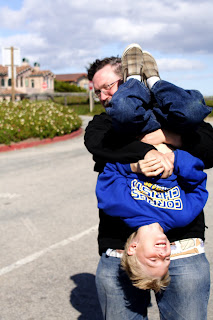 It's the mindset, the gestalt, they they pick up on, and their sharp little minds quickly interpret and extract the essentials despite our various faults as parents and fallible people. God knows we have plenty of faults. 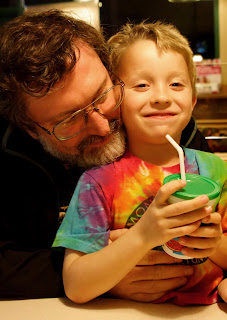 It makes me wonder what other traits and abilities they're picking up as well. Music, that one seems to be getting passed along pretty clearly. Sarcasm and a quick wit as well. Messiness is getting tempered with having to clean up after themselves, at least while they're in my house. Paul is a good dad, my boys are very lucky that way. 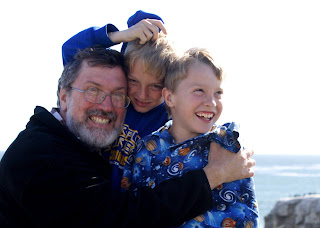 The other less tangible things that I hope get passed along from Paul are hard to be sure of yet, though. I wish for them these traits from him: Big, generous hearts, kind souls. Being good people, good men. Not being afraid to show true affection. 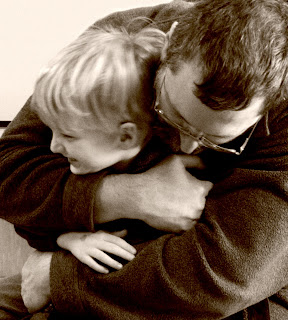 Courage to stand up for themselves and their friends and family, even against what's popular or commonly accepted. Morals that support and enhance the world and make it a better place rather than restricting and constricting it. Freedom and the determination to follow their bliss rather than being held back by what society tells them they should do or value. 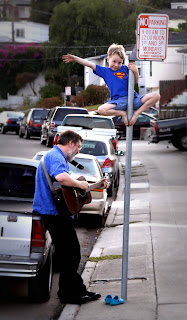 Happy Birthday, Paul. Thanks for asking to me to ride along on your messy, musical roller coaster life. Plenty more thrills and fun to come! 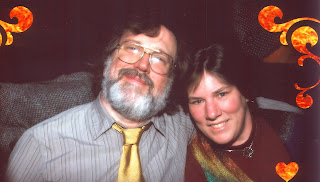